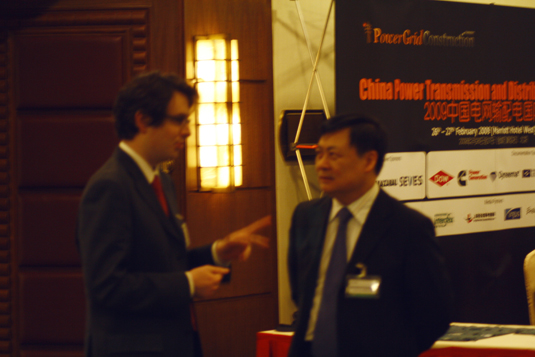 "We plan to have 17,600 kilometres of UHV lines by 2012," Lu Jian, head of Development and Strategic Planning Department with the grid, told the 2nd Annual Power Transmission and Distribution Summit in Beijing.

This would triple the lines in use and under construction by the grid, as the firm is eager to boost its ability in trans-regional power transmission.

The company started operating China's first UHV line in January that spans 640 kilometres from northern Shanxi province to central Hubei province and has planned to invest about 100 billion yuan in the next three or four years for UHV lines.

It has started building two UHV direct current lines, linking hydropower-rich Sichuan in southwestern China to energy-hungry Jiangsu and Shanghai in the east, with each extending more than 2,000 kilometres and expected to cost 40 billion yuan in total.

China also plans to build power lines to import electricity from Mongolia, Russia and Kazakhstan, Lu Jian, an official from

the planning department of China State Grid, said at the China Power Grid Transmission and Distribution Summit in Beijing today. He didn’t give a time frame.

This UHV DC power line is the first of its kind in the world, Gan said. In 2006, CSG started construction on the project and has already built converter stations in Yunnan's Chuxiong City and Guangzhou City in Guangdong. The project is part of the central government's plan to increase power transmission capacity from western to eastern China, Gan said.

Following in the footsteps of the power grid industry’s investment craze, specifically in the area of power transmission and distribution construction, China is shifting its focus to power grid upgrades.

BEIJING, China 26-27 February, 2009 – To significantly improve the capability of power transmission and distribution in China, the government will invest more than RMB 1 trillion in power grid development to maintain momentum and steady growth until 2011. As a result of the fact that these upgrades are taking place in the midst of a financial crisis, Noppen brought industry and government experts together to address key industry questions. The “2nd Annual Power Transmission and Distribution Summit”, which took place at the Marriott West, was a platform to learn about the latest policy updates, exchange ideas, review technologies, and capitalize on business opportunities through networking with potential partners and clients.

A variety of industry experts spoke at the conference including Dai Huizhu, a professor at the China Electric Power Research Institute, who addressed the status of policies in China’s wind power industry. Lu Jian, division chief for the Development And Strategic Planning Department of the State Grid Cooperation of China, discussed state grid upgrading and UHV planning; Hu Xiaozheng, director general of the Electric Reliability Management Center in the State Electricity Regulatory Commission, spoke about the reliability of the power grid system in China; ML Chan, China executive director of the Smart Grid Cooperative JUCCCE, discussed how to deliver energy efficiency in smart grids and Jiang Liping, vice chief engineer of the State Power Economic Research Institute, gave a presentation on the role of power grids in advancing new energy development.