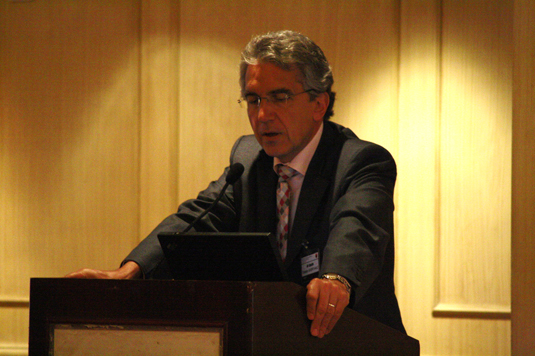 Challenges and Opportunities during the Economic Crisis
By John Zheng

Tianjin, China. April 9. CHINA CHEMICAL REPORTER - "Because of the decrease of demand for crude oil caused by the global financial turmoil, the average price of crude oil in the international market is expected to be US$40-50 per barrel," said an expert from CNPC Research Institute of Economics and Technology at the 4th Annual Petrochemical Summit, held by Noppen on April 9th-10th in Tianjin Municipality, "the petrochemical market in China is expected to stay slack in 2009."

PetroChina and Sinopec Corp. will also have several ethylene and downstream petrochemical units completed in 2009. Due to the massive new capacity and the increasing amount imported, the petrochemical industry in China will face great challenges.

However, an expert from Sinopec Research Institute of Economics and Technology said that Many Chinese Petrochemical enterprises have low production cost through refinery-petrochemical integration, a completed sales network and low logistics cost, and therefore have a competitive edge.

Besides, the stimulus package granted by the Chinese government will help promote the demand growth of petrochemicals in China.

"China will experience an earlier recovery than the rest of the world," commenced an expert from Air Liquide.

CNPC and Rosneft to start construction on Tianjin refinery in Q2

Tianjin. April 9. INTERFAX-CHINA - Dongfang Petrochemical, a joint venture between China National Petroleum Corp. (CNPC) and state-owned Russian oil company Rosneft, will start construction on a refinery in Tianjin Municipality in the second half of this year, governmental and company officials told Interfax on April 9.

The RMB 21 billion ($3.07 billion) refinery, which will be built in the Tianjin Harbor Industrial Park (THIP), will have an annual crude oil processing capacity of 10 million tons, said Zhang Dongsheng, a senior official with the Tianjin Development and Reform Commission, at Lnoppen's 4th Annual Petrochemical Summit in Tianjin. Zhang did not say when construction would be completed.

CNPC controls a 51 percent stake in the joint venture, while Rosneft owns the remaining 49 percent, according to CNPC.
- TW/HJ

Construction was supposed to begin last year but was postponed after the Sichuan earthquake hit in May, Hu said.
- TW/HJ

TIANJIN, China, April 10-11, 2009 – Leading Experts from the local and international petrochemical industry gathered for the 4th Annual Petrochemical Summit held by Noppen on April 10 and April 11 in Tianjin. Attendees analyzed the challenges faced by the industry as result of the current global economic crisis. They also discussed opportunities for sustained growth.

On April 10 presenters outlined the specific challenges the global downturn posed to the petrochemical industry. In his session, Hu Jie decided to give a warning about the oil price: “Because of the decrease of demand for crude oil caused by the global financial turmoil, the average price of crude oil in the international market is expected to be US$40-50 per barrel.” Andrew Spiers showed optimism saying that industry consolidation would stand for “significant M&A opportunities”. He added also that survival of the downturn would be achievable as long as “access to advantaged feed stocks, portfolio synergy, optimal integration, strong commitment to innovation, leading edge technology, product differentiation and customer intimacy” prevailed.

Day 2 morning key addresses focused on how Middle Eastern expertise can be leveraged to Chinese benefit. Besides this global industry theme, presenters from Evonik Degussa and Mitsui elaborated on the role new technologies would continue to play in petrochemical competition. The event was successfully closed with a tour of the Sabic-Sinopec project in industrial zone.