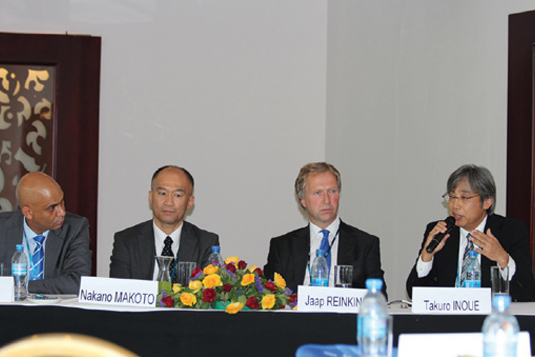 African trade is booming and more and more shipping lines fi nd their way to the African ports. This has led to huge expansion projects and plans to build new terminals all over the continent. In order to unlock the African hinterland, ports and rail authorities are working together to set up new logistics infrastructure where investment fi gures of single projects in the sector go up to 10 billion USD.

This event brought together government offi cials, port and transport authorities, associations, logistics providers, investors, consultants and industry experts to discuss the current status and future direction of the ports and railway industry in Africa.

The Day 1 conference was kicked off by Mr. Festo MWANYIKA, Assistant Director of Railway Infrastructure Section of the Ministry of Transport from Tanzania. Mr. Mwanyika offi cially opened the summit by giving an overview of all the different projects and plans that are taking place in Tanzania with regards to both the port and railway infrastructure upgrades.

Mr. Mwanyika’s introduction was followed by Mr. Ilidio MATOLA, Director for Strategic Planning and Business Development of the Ports and Railways of Mozambique. Mr. Matola shared his insights as to how CFM looks at playing a role in the planned transport corridors on the South East region of Africa. He looked at both port and railway expansion projects in progress currently in Mozambique, such as Maputo Port, Port of Beira and Nacala and the rail rehabilitation projects for Ressano Garcia and the Nacala Corridor.

After his enlightening speech, the fl oor was handed over to Kenya’s representatives. Firstly, Mr. Patrick NYOIKE, Head Financial Accounting of the Kenya Ports Authority on behalf of Mr. Gichiri NDUA, Managing Director, gave an outline of latest development in port sector for Kenya and where they are investing in, such as modernizing terminals and investing in technology and security systems and gave an overview of the different port and railway plans. He was followed by Mr. Hideo EGUCHI, Chief Representative from Japan International Development Agency who gave a detailed presentation on the upgrade of the Mombasa port, the milestones achieved and the phases still to come for this upgrade and the role JICA plays to support Kenya Ports Authority with this. After the first tea break, the focus was shifted to investments and Mr. Lawrence KIGGUNDU, Transport Engineer from the African Development Bank kicked the session off by looking at the infrastructure challenges and defi cits Africa has to deal with and the role of the Bank by investing in ports such as Djibouti Port, Walvis Bay Harbour and Damietta Port and aiding by fiNanking railway infrastructure and logistics corridors across the countries. This broad perspective of investments in African logistics infrastructure was followed by a presentation of Mr. Samson BHUZA, Chief Planning Manager at the National Railways of Zimbabwe. Mr. Bhuza showcased the general state of railways in Africa: lack of equipment or aged equipment and insuffi cient funds to replace the outdated infrastructure.

After the discussion panel, Mr. Johny SMITH, chairman of the day and CEO of the Walvis Bay Corridor Group, shared his experience on the regional challenges for the transport and logistics sector in Africa and how corridors can help speed up the development of infrastructure in Namibia. He also explained how the government is investing heavily along with the private sector to ensure thorough connectivity to its neighboring countries via ports, railways and roads. The 3rd session of the day was concluded with a highly informative presentation of Mr. Stan DE SMET, General Manager of Phaeros. He focused on the reason why a port community system is not enough and how a port management system can contribute to the ports operations.

After another successful networking break, the fi rst day was concluded by Mr. Jorgen JUHL and Mr. Bernard DZAWANDA. Mr. Jorgen JUHL, Project Director Marine & Foundation Engineering of COWI highlighted the expectations of extractive industries on pit to port operations as well as the expectations of oil and gas companies for local logistics. He explained different case studies such as the Nacala Corridor in Mozambique, via the Ain Sukhna Product Hub in Egypt to the Sonaref Refi nery in Lobito, Angola and the Cotonou Container Terminal in Benin as well as Walvis Bay. He also gave an overview of the work they undertook for the Tanga-Arusha and Isaka-Mwanza Railway upgrading project in Tanzania and the Railway Bridge Study they did for Kenya and Uganda. Mr. Bernard DZAWANDA, Executive Director of the Southern African Railway Association gave the last presentation of the day and spoke on the problems and diffi culties that the railways currently face as well as the initiatives that have been taken over the past years to resolve these problems. He also explained the various roles that the government as well as the private parties play in this sector.

The day came to an end with closing remarks of the chairman, Mr. Johny SMITH who pointed out that the day had shown them both sides of the coin: the challenges as well as the opportunities for Africa’s transport sector. He also encouraged the delegates to implement all the projects and plans as it is the implementation, the act that will benefi t this sector and country.

The second day started with the presentation of Mr. Lin YICHONG, Vice President of China Harbour Engineering Company. Mr. Yichong’s presentation showed the delegates about the port development from the past 30 years in China and with that background and experience, he shared different suggestions to increase African ports’ contribution to the regional development. After Mr. Yichong’s presentation, the delegates learnt about the different port and material handling solutions that Terex can offer to reduce loading time and increase volumes at the ports. Mr. Neil CLEGG, General Manager Sales and Service & Mr. Colin CLEGG, Business Development Manager at Terex showed throughout their presentation how port handling effi ciency could be increased through the use of right material handling equipment. Mr. Gagan SEKSARIA, CFO & Head of Investments of ICTSI Africa, unfortunately could not be present at the summit but spoke to the delegates via video. He highlighted both the merits and challenges a PPP model could offer for African ports and illustrated few examples from Madagascar and Nigerian ports.

After the networking session, Mr. Caesar MTETWA, General Manager Rail Network, shared his knowledge on the effi ciency of rail network and ways to increase it. Through a very detailed presentation, Mr. Mtetwa not only explained the market demand strategy of Transnet, but also looked at their Must Win Battles and their plans to achieve MDS. Returning to the ports sector, Mr. Daniel PERSHIN from Solvo shared some guidelines with the African port authorities and terminal operators on ways to choose the right Terminal Operating Systems for their ports and after that, Mr. Richard ANAMOO, Director General of the Ghana Ports and Harbours Authority looked at the port reform models taking place at the public service port, a common practise in Africa, to the tool port, the landlord port and the private service port which are mostly used in Europe. He then shared his experience at Ghana where they implemented the landlord port system and explained both the strong points as the weaknesses of this reform and why they chose to go for the hybrid port system, called “Amodiation”