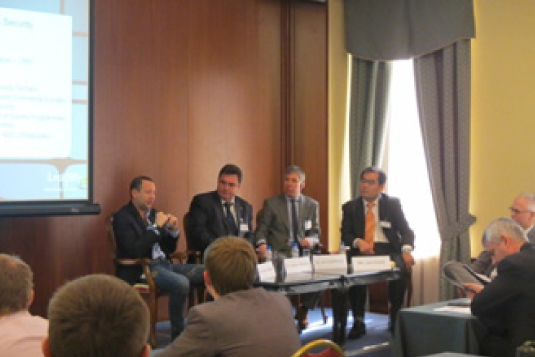 There is no need to repeat that the sport industry in the Russian Federation received an enormous boost after the country was entrusted with some of the largest global sports happenings: the Winter Olympics in 2014, the Confederations Cup in 2017 and the World Cup in 2018.

Numerous stadiums, infrastructure and retrofit projects are in the pipeline in order to fulfill the very demanding competition and visitor requirements. Not only quantity challenges, but also quality and safety challenges are boosting the market and making space for updated technologies to be implemented.

The Chairman of the Summit, Mr. Peter Ayres, Director-Building Engineering of Aecom, opened this event with the welcome speech and contributed further by sharing his expertise with the speakers and all participants. As a man with high expertise, he answered with poise all queries and comments and was successful in gaining everyone’s attention.

Following this, Mr. Stepan Svetankov, Director-Corporate Finances of KPMG, was the first presenter who provided a broad outlook of trends and prospects for Sports Stadium Development in Russia, in perspective of upcoming FIFA World Cup 2018. Furthermore, he explained the cost and alternative financing structures and the legacy issues for stadium development for Russia 2018 and shed light on the current conditions of the host stadiums for the WC. After the presentation, Mr. Svetankov answered questions from the audience and also spoke on possible revenue sources; one being commercial revenue.

Later, Mr. Ayres, Chairman of the summit, shared his knowledge on designing stadiums and how to enhance experiences of fans. To build a stadium, various aspects such as weather conditions need to be kept in mind as it differs in different parts of the country and is essential for the follow up maintaince and each project should have Master Plan. He explained this with an example of London Olympic Park 2012 which is still continuing as a project. Mr. Ayres also mentioned the importance of integrated technology as visitors should be able to use their mobiles or other technology to stay in touch with the outside world.

Mr. Dmitry Kondratyev, General Manager of Tyco Integrated Fire & Security, gave a brief introduction of the company. Thereafter Mr. John Flanderhijn, Director Business Development Continental Europe of Tyco Integrated Fire & Security, showed their capability through an overview on stadium and their solutions to support events and various means to maintain any situation and environment safe and secure. The participants were impressed with the uniqueness of their products as the same products can be applied in different designs.

The following keynote speech was given by Mr. Alexey Suprunov, General Director of Intex, who presented on the stadium projects they worked on and are in progress. As a very experienced figure, Mr. Suprunov shared with the audience varied designs and construction process for unique sports facilities in Kazan, Yaroslavl and Rostov. He is especially very proud of their work in the city of Kazan, which is the second city with the most sports objects and is also a place for the Universiade 2013, which will be held in July.

Ms. Tracey Short, New Business Development Director of SMG Europe, showed audience the possibilities of how to maximize the economic potential of venues. Some of the factors highlighted were the requirement to establish a successful event strategy which will bring in the income and creates multi-functional venues. After Ms. Short’s speech, the public enjoyed watching a video showcasing the venue project in Wroclaw.

Next was the presentation of Mr. Sergey Alekhin, Product Engineer of Sika where he explained ways to improve building of sports facilities with the use of suitable materials and gave different case studies of the projects they worked on. Mr. Alekhin answered the questions coming from the participants related to consulting Russian institutes and using Russian science knowledge.

After the lunch break, the participants were enlightened by Mr. Konstantin Bulanov, Senior Business Development Specialist of 3M who showcased audience their latest innovative solutions for sports venues such as solutions for dirty shoes as well as working with media center for the Olympic Games in Sochi 2014. Mr. Bulanov mentioned that people often initially prefer cheaper solutions which often are of bad quality and later regret this decision and then turn to companies as theirs for solutions.

Post this, Mr. Slobodan Delic, Director of Venue Technology, Client’s Requirements and Operations of Sochi 2014 Organizing Committee for the Olympic & Paralympic Winter Games provided his knowledge on means to equip a stadium with state-of-the-art technology with examples of Olympic Games and showed a technology service model which is used at major events.

Mr. Evgeniy Ivanov, Sales Director of Hytera, presented their latest mobile audio communication solutions which can enhance operations in stadiums. He displayed international case studies where this technology was used especially during the Asia Games in Doha and China, Tennis Tournament in China and many others.

Mr. Victor Verma, General Manager of YIT Elmek, informed everyone about the innovative vacuum waste collection & engineering solutions for efficient functioning of sports facilities. He also shared his views about the perspectives of development of sports objects and green technology.

The last keynote speech of day 1 was given by Mr. Reto Rey, Managing Director of Nussli International AG. Mr. Rey spoke on sustainability in stadium design and gave interesting international examples and showed different approaches for stadiums. He advised ways to avoid white elephants’ at major events in future. He received many questions from the listeners about the stadium extensions in Russia, investment, FIFA recommendations and requirements which he explained from his vast experience.

Mr. Peter Ayres, as the Chairman of the conference, ended the first day by summarizing all the presentations given that day and concluded by sharing various stadium design possibilities, revenues streams for venues and innovative technologies that can be used in sports facilities.

Mr. Ayres warmly welcomed the speakers and the participants on the second day of the conference.

The opening presentation was from Mr. Thomas Heidemann, Partner / Lawyer of CMS. He explained in depth about ownership and business partners in the stadium industry and provided procedural information on legislative bodies and their roles. Hereafter, Mr. Heidemann clarified specific laws in Russia concerning stadium construction and management and concluded his presentation with an important advice to the new investors and stakeholders about networking with right people in this industry.

Following that presentation, Mr. Vladimir Geninson, General Manager of NSC Olimpiyskiy showcased means he employed to manage the main stadium of Euro 2012 and ways he was successful in turning it into a financially self-sufficient stadium and gives credit to the fact that it is not owned by any club. Further on, he had a long interaction with the audience by means of Q and A wherein people asked about the changes after 2012, multi-functionality, and profitability.

Mr. Väinö Nuuttila, Key Account Director, International projects in Russia and CIS of Onninen Oy, accentuated the advantages of implementation of modern green techniques in stadium projects in the range of water, waste, energy and renewable energy. He provided some references of their experience in the sports facilities.

The discussion panel was led by Mr. Thomas Heidemann from CMS, with the participation of Mr. Leo Yoon, General Manager of Samsung Techwin, Mr. John Flanderhijn, Director Business Development Continental Europe of Tyco Integrated Fire & Security, Mr. Vladimir Novikov, Head of Engineering Support of Sports Programmes of Russian Olympic Committee and Mr. Vladimir Geninson, General Manager of NSC Olimpiyskiy. They gave their valuable insights on safety and security in stadiums and to integrate technologies to create secure and safe environment for any visitors.

After this interesting discussion, the participants welcomed Mr. Vladimir Adikaev, CEO of OWPG-Kompakt, who gave his presentation on effective management of the design and construction of stadiums for the 2018 World Cup and on the importance of networking and coordination among the general designers and general constructors to finalize great sports venues.

Ms. Gerdien Vloet, Sales Manager of Hendriks International, updated the attendees about the natural grass solutions that can be used in modern stadiums. The company has experience working for World Cup and Euro Cup stadiums and explained the reasons why artificial grass does not benefit in the long run.

Post lunch, every participant was excited to listen to the keynote speech of Mr. Olivier Lemarchand, Designer of Record, FISE AA, Architect SAFA / Finnish Association of Architects. He spoke on behalf of Larkas & Laine Architects about their most recent concept of The Mechanical Stadium- a click on venue. During Q & A, he was answered queries on the lifting mechanism, prices concerning the venue and confirmed the security maintained in the construction of such sports object.

Our media partner, Sport Business Consulting was pleased to inform the gathered their perspective on efficient stadium management and more precisely on the multi-functionality. Chief Editor Elena Savraeva, who is aware about the current trends and events in the world of sports, gave her valuable insight.

Mr. Peter White, Partner at DLA Piper, shared his knowledge and opinion about finding investors for projects in stadium and sports industry and explained how new sports facilities can generate an increased revenue stream, possible attractive investment opportunity for the companies involved in sports and entertainment sector.

The conference finished with the presentation of Mr. Thomas Speck, Managing Director of arenaCom, who spoke on the risk management in football stadia. He informed everyone on possible ways to avoid mistakes in design, construction and operation. Mr. Speck ended his presentation by showing pictures of mistakes made in stadium design and construction and explained how it can be avoided.

We would also like to extend our gratitude to all delegates for their active participation. Their questions spoke to the heart of the main issues facing the Stadium and Sports Industry.

Noppen would like to express a special thanks to the sponsors of the Russia Stadium Build & Technology Summit; Tyco Integrated Fire & Security, Sika, 3M, Hytera, Onninen Oy, Hendriks International, Samsung Techwin, Panasonic, Motorola, Hortilux Schreder, IDS, Mitsubishi Electric and AGC. We have no doubt that your contribution helped in making this event a success.